I’m still reflecting on St. Francis and St. Claire after our visit to Assisi last month, particularly on the Porziuncula chapel. 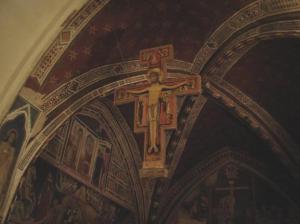 There are some icons that are, paradoxically, iconoclastic. This is most obvious in the cross. It is also true of the Porziuncula. The Porziuncula was among those churches that Francis rebuilt after he heard the Lord speak to him before the San Damiano crucifix: “Francis, Francis, go and repair My house which, as you can see, is falling into ruins.” We know that Francis initially understood this as a commission to buy bricks and to restore the churches in disrepair. But later he realized this as a call to restore the spirituality of the church. Still, there is something important and prophetic in Francis’ selling his father’s wealth in order to buy bricks and mortar so that he could renovate church buildings. 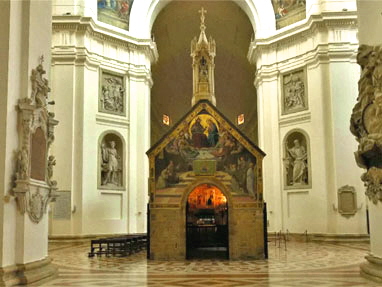 When we think about building churches, we may think of structures large enough to hold the inhabitants of a parish or having enough room for the congregation to grow. In the last few decades, one of the dominant models of church growth is the mega-church. This large, programmed model was not Francis’ – although he had a mega impact on the church and the surrounding cultures. The Porziuncula is tiny. It is only 40 feet long by 13 feet wide by 18 feet high. There is room for 20 to sit and maybe 10 to stand before the altar. This is the place where Francis and the first friars lived, prayed and died. This small, insignificant chapel that stands in the shadow of Assisi was the place where this amazing and reviving movement began.

Today, however, the Porziuncula is the center piece of a large ornate church. In the midst of marble and gold, the Porziuncula is an obstruction. The view of the altar is impeded by the Porziuncula for those sitting in the back pews. Its walls of old rock and its faded icons stand in contrast to the shine of the church that encases it. And so the Porziuncula, almost 1000 years later, continues to speak prophetically and powerfully about who God is and how God works in a world and even in a church that is entangled by greed, power and grandiosity. 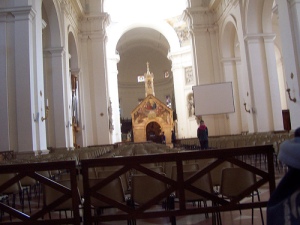 Although the Porziuncula speaks against the church when it succumbs to these entanglements, it also speaks of Francis’ commitment to follow God in and with the church. He never rejected the church; rather, he only proceeded in ministry in as much as he had the blessing of the church.

The Porziuncula is an iconoclastic icon. It is an image that subverts attachment to images. It is an attraction that contradicts our notions of attractive. It invites the church to worship through renunciation and sacrifice, and yet it is inviting.