In all of our activities, we serve among 60+ kids per week. We serve with the assumption that God is always doing something before we know it. So, we are sensitive to the children and to God’s action in them, trying to avoid any form of manipulation. A few weeks ago during our Saturday kids’ club, Oana told the children about the life of David. She explained David’s failure in committing adultery with Bathsheba and how he killed her husband Uriah. Then, after David repented, God forgave and restored David. At that moment, one of the 11 year old boys said, “Who? Who forgave David?” Oana repeated that God did. The boy gasped with unbelief. Why would God forgive a man who did such bad things? At first, I was struck by the boy’s shock. He has seen some bad things in his young life, but has not lived in a context of grace. And then I was struck by own reaction. I am so accustomed to Bible stories that I am guilty of domesticating God and failing to see how scandalous God’s grace is. Recently, I read the words of Eugene Peterson: “It is hard to see grace because our whole culture is going in the other direction, saying that if you’re smart enough and get the right kind of help, you can solve all your problems.” The Spirit of God in this young boy awakened me anew to the uncommon, hidden and dangerous grace of God. 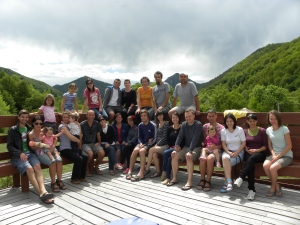 I write this update from Lepșa, a village in the Vrancea Mountains, where we hold our annual retreat and summer camp. This week we are meditating on our vision statement: serving Jesus among the most vulnerable. Every morning we have a time of worship and a devotional, followed by 2 hours of solitude. Then we gather to share what God has impressed on us. During our afternoons and evenings, we play games, sleep, celebrate and review some aspects about our ministry like our organizational structure, what we communicate about our ministry, and the five love languages. This year we also celebrated Paul Rase’s 10 years of service with us. It is a joy to have this annual rhythm of withdrawing together to seek God, to enjoy one another, and to be rejuvenated in the midst of nature. 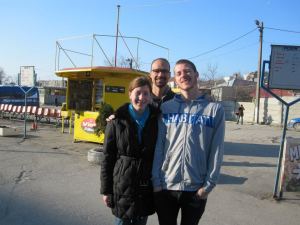 The retreat has been timely after a busy spring. After 13 years, I again became a Servant Team Coordinator. We had a team of two, which spent two months in Romania followed by two months in Moldova. While they were with me, they helped with the games, art and kids’ club, and we read a number of good books: Rich Christians in an Age of Hunger, How God Became King, The Open Secret, along with other articles. We really enjoyed having a Servant Team again and are praying for someone to be our Short-term Programs Coordinator, so that we can have them more consistently. 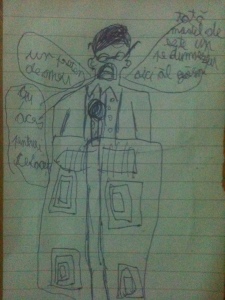 This spring we visited almost all of the evangelical churches in Galati and presented our activities. The children and some of our community members sang some songs. In a few churches, I spoke on Hagar and the vulnerable, Jonah and mission, and foot-washing and intimacy. (The picture on the left was drawn by one of our children as a spoke.)

In March, I led our community in Moldova through a few days of evaluation as they came up with their tactical plan for the coming year. A few weeks later, I returned to Moldova to participate in a conference on Evangelical Mission in an Orthodox Context, where I had the opportunity to present a case study. In April, I led our community in Romania through a tactical planning session. We decided that our major focus for the year is aligning ourselves with our newly formulated mission statement: a better future for vulnerable children through personal

development and by partnerships of friends.

In April, we had two friends, Deb and Krystel, visit us from Lifegate Church in Omaha. Deb led us through teachings and discussions on StrengthsFinders, stress management, geneograms, teambuilding and counseling. Krystel talked to us about breaking generational sin. Both of them did personal counseling with our staff. The few days we had together was a rich investment in our community.

We also had some friends – Frank, John and David – visit us from

England. They finished up some electrical work in the village Day Center, sanded and painted lockers, and installed a ventilation system in our bathroom. After 12 years, we have leaky pipes, broken faucets, rusty shower basins and rotten door frames and need to completely renovate the bathroom. Because the children that come to the Community Center have no hot water and many have no indoor water, this facility is a major support for them. Having the ventilation system finished is a big start. We need to raise about $2,500 to complete the renovation. Please consider helping us with this investment.

In April, I was invited to a consultation on urban mission in a western city in Romania called Cluj. The conversations revolved around the place of the church in the city and the way the church interacts with the city. This exercise forced everyone to think beyond the walls of their own churches and their own programs. Each was able to see their particular congregation in light of the city – its dynamism, its problems, and its needs.

For Labor Day, we went with the kids to a nearby forest and played games and BBQ-ed. The mother of one of our first-graders is deaf. So, she asked us if she could bring her mom with us. It was a joy to see this lady, who has suffered socially and physically over the years, to be loved and to enjoy herself with us. I was especially encouraged that our first-grader would desire her mom to spend the day with us.

As with past years, we had a feast for Easter, which took place on May 5th on the Orthodox Calendar. With the children, their families and our staff, we had about 60 people. After the singing and the meal, the kids took turns beating a piñata, which eventually gave up its candy.

Well, that brings you up to date with a busy few months. I will end this letter with another lesson that we learned from the children. Each day the kids have a time of prayer. One of the second-graders, after praying for her family and her day, said to God, “…and Father, take care of yourself too.” We have glimpses into the heart of the Father. We pray that we have eyes to see and ears to hear.

The word Pantocrator is of Greek origin meaning “ruler of all”. Christ Pantocrator is an icon of Christ represented full or half-length and full-faced. He holds the book of the Gospels in his left hand and blesses with his right hand.

The icon portrays Christ as the Righteous Judge and the Lover of Mankind, both at the same time. The Gospel is the book by which we are judged, and the blessing proclaims God’s loving kindness toward us, showing us that he is giving us his forgiveness.

Although ruler of all, Christ is not pictured with a crown or scepter as other kings of this world. The large open eyes look directly into the soul of the viewer. The high curved forehead shows wisdom. The long slender nose is a look of nobility, the small closed mouth, the silence of contemplation.

It is the tradition of the Church to depict “God is with us” by having the large Pantocrator icon inside of the central dome, or ceiling of the church.