This tag is associated with 3 posts

Today it is a discotheque called VIP. The building holds a restaurant, a film developer, and a copier, among other stores, but it used to be one of the cinemas in Galati. The art on the front of the building reflects the communist era in which the cinema was constructed.

The communist art is controlled by its geometric shapes. The machinery is manipulated by a human being, which says something of a humanizing vision. But the technology, in its projection of the face of its technician, disfigures the human being. In the projection, humanity is controlled and reduced to geometry.

We are reminded of Narcissus, who fell in love with his own image that was reflected in the pool, not realizing that it was only a reflection. Here the woman has constructed her own reflection. She is the center of the piece and is the largest feature. And she gazes at herself as the camera projects her light in every direction.

The question is whether this woman represents the self-enthronement of humanity as in the communist vision or are the echoes of Narcissus and of a flattened out human image a subversive critique of communism?

Creative Protests in the City (part 2)

A few weeks back, we were led through a series of reflections on Creative Protests in the City by our friend David Clark, the pastor of the Steeple Church in Dundee, Scotland.

A CRITIQUE THROUGH ART

Those who make them (idols) will be like them, and so will all who trust in them.

When it was almost time for the Jewish Passover, Jesus went up to Jerusalem. In the temple courts he found people selling cattle, sheep and doves, and others sitting at tables exchanging money. So he made a whip out of cords, and drove all from the temple courts, both sheep and cattle; he scattered the coins of the money changers and overturned their tables. To those who sold doves he said, “Get these out of here! Stop turning my Father’s house into a market!” His disciples remembered that it is written: “Zeal for your house will consume me.”

The Jews then responded to him, “What sign can you show us to prove your authority to do all this?”

Jesus answered them, “Destroy this temple, and I will raise it again in three days.”

They replied, “It has taken forty-six years to build this temple, and you are going to raise it in three days?” But the temple he had spoken of was his body.

What do you discern as the impact of consumerist idolatry on people’s lives in Galati?

Are there ‘dislocated sections of society’ within Galati’s city community? Who are they? What characterises their lives?

Can you identify any obstacles that prevent you (as a community) being more effective in responding to Jeremiah’s command – “seek the peace and prosperity of the city”? (Jeremiah 29:7)

From a Moldovan Bus Station 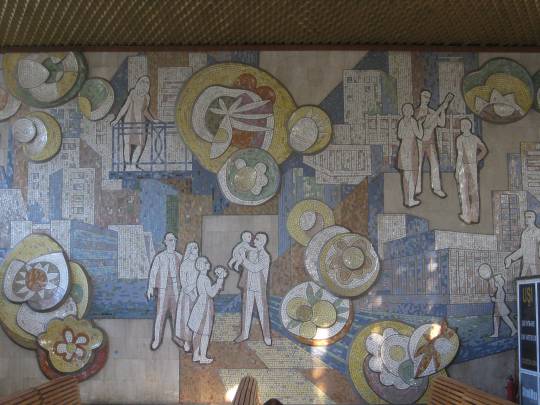 I was visiting our young Word Made Flesh community in the Republic of Moldova last week. As we were getting ready to catch our bus back to Galați, I stopped for a few minutes to observe the old communist mosaic that stretched across the wall of the central bus station. Every society is supported by its myths, and every government propagates them. When I look at the communist art that is still hanging on, I can hear the stories and identify some of their beliefs.

The ideology promised civilization and industry, represented by the high-rise buildings and steel construction. Against the oppression of labor in capitalist societies, communism promoted the well-being of the citizen. A woman stands above from her steely balcony rather than under its weight. A worker reads as he welds, suggesting his work serves the higher purpose of cultivating through education. There is celebration and song. And families come together and grow, achieving a happier future generation.

Interestingly, there is no church, as in communism it is superfluous. Yet, the art itself is patterned after Orthodox mosaic iconography. And, like Orthodox icons, the people do not smile, although their demeanor gives an impression of happiness.

Like much of communist art, the shapes are geometric and controlled. And in this depiction of utopia, there is little nature. The sun, stars and moon appear to be ordered by man to function along with the planning of the society. The flowers are not rooted. There is much industry but little life. And this and images like this are what inspired the citizens of the Soviet era.