you're reading...
Life in Galati, Poverty

It has yet to snow in Galati this year. Well, we did see a few flakes, but nothing stuck. On the warm winter days, I’ve been able to go for jogs and spend more time outside. All over the northern world, I’ve heard people rejoicing in the blessing of a 60 degree January.

Now, most of us are also aware of the negative effects of warm winters: diminishing glaciers, rising sea-level, endangering species, among others. But I was struck last week by the comments of Gregory. 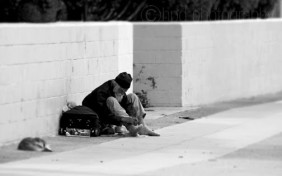 Gregory is a bearded, middle-aged man that I’ve known for years. He often sits near a marketplace near my home, displaying and trying to sell trinkets, nuts and bolts, and other items he’s found mostly by rummaging through the trash. Gregory has mental problems that make it difficult to speak and to interact with others. But he doesn’t have any inhibitions when it comes to dogs. Usually, Gregory is surrounded by a pack of street dogs that he cares for.

During the holiday season, Gregory looked better kept than usual. He decorated his frayed stocking cap by tying Christmas tree decorations to the bob. I was happy to see both his creativity and his awareness of the festivities.

Walking past Gregory, I observed a group of kids that were following him, mimicking him, and calling him “crazy.” But Gregory didn’t seem to notice the kids’ mockery. He continued to direct cars into the parking spots as they pulled in and out of the narrow street, hoping that the drivers would give him some small change for his service.

As I was finishing up my shopping, Gregory came into the store to buy some food with his freshly earned coins. The sales clerks obviously knew him, helped him with his purchase, and tried to usher him quickly back outside. Before he left the store, Gregory blessed everyone in the store with his “Happy New Year!” This surprised me as I had never seen him so communicative, especially in public. He was obviously struggling to be coherent, but he continued with a prayer: “May God give us snow in the new year!” Again, I was taken aback. I assumed that Gregory, like others that I know who live on the streets, would be happy with a warmer and drier winter, but here he was praying for snow. Gregory went on: “I have some debts that I can pay off by sweeping the snow off of your walkways.”

After I received my change and picked up my grocery bags, I exited the store to find Gregory giving some of his food to each of the dogs surrounding him. On my way home, I smiled as I thought of Gregory’s smile and his words. Although I am strongly against the street dog population, Gregory has made them his friends. Although I often hear people accuse the poor of being lazy, Gregory was finding ways to serve and work for his daily bread. Although I find myself secretly hoping for a warm winter, Gregory is praying for a “normal” winter with snow. His kindness, gentleness, industriousness and generosity provoked me. I found myself asking, “Really, who is acting sane and who is acting insane?”