Creative Protest in the City (part 1)

A few weeks back, we were led through a series of reflections on Creative Protests in the City by our friend David Clark, the pastor of the Steeple Church in Dundee, Scotland.

He began by talking about the Occupy Movement and how it touched his city of Dundee. Rather than ignoring or bad-talking the movement – which sadly has been the response of many Christians – David Clark went out and spoke with them and asked them about their concerns. This wasn’t very difficult as they were camping next to the church property. He was able to identify the concerns that they shared and discussed ways in which they could respond together.

This really challenged our community to start to think about our participation in the city and the church’s task of prophetic engagement. 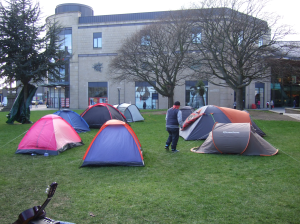 I will rejoice over Jerusalem
and take delight in my people;
the sound of weeping and of crying
will be heard in it no more.

“Never again will there be in it
an infant who lives but a few days,
or an old man who does not live out his years;
the one who dies at a hundred
will be thought a mere child;
the one who fails to reach a hundred
will be considered accursed.
They will build houses and dwell in them;
They will plant vineyards and eat their fruit.
No longer will they build houses and others live in them,
or plant and others eat.
For as the days of a tree,
so will be the days of my people;
my chosen ones will long enjoy
the work of their hands.
They will not labour in vain,
nor will they bear children doomed to misfortune;
for they will be a people blessed by the LORD,
they and their descendants with them.

Before they call I will answer;
while they are still speaking I will hear.
The wolf and the lamb will feed together,
and the lion will eat straw like the ox,
and dust will be the serpent’s food.
They will neither harm nor destroy
on all my holy mountain,”
says the LORD.

What would the citizens of Galati say are the top three problems in their city?

What do you observe are the consequences of the present recession in Galati?